In or out? It all depends…

As arguments about whether Britain would be better off in our out of the EU multiply, it all depends say Dr Carmen Hubbard and Professor David Harvey from Newcastle University's Centre for Rural Economy in our latest Landbridge blog.


So much debate, so many arguments and it’s only March.  Will anything be clearer by the time the referendum on UK membership of the EU actually takes place in June?  Will the British people have a clear idea of what they want to achieve by means of their vote?  Or will they be responding to a “gut feeling”?


As academics we try always to consider the evidence, but the problem with Brexit is that so much evidence is either missing or speculative at best.  Answers to whether the UK would be better off outside the European community are invariably “it depends” or that “gut feeling”.


Looking first at trade and the rural economy, our main areas of concern, we immediately become conscious of the unknowns.  Leaving the EU means leaving the Common Agricultural Policy (CAP), but without knowing what financial support (if any) would replace it, this is bound to make farmers and agri-companies nervous.  It’s certainly possible that the Treasury would seize the opportunity to reduce agricultural subsidies or even abandon them altogether (particularly the direct payments).  That may be the most extreme potential outcome, but it would certainly have consequences for most of the UK’s farmers.  Shifting these responsibilities to the devolved governments of England, Scotland, Wales, and Northern Ireland might be a more likely scenario but there has been no obvious discussion about this.


Literature from both the “in” and “out” campaigns features possible effects on food prices.  Unpicking these is complicated.  Much of the food we eat in Britain is imported and consumers expect all year round access to a wide range of fresh produce.  Whether they would end up paying less or more for these after Brexit would depend largely on new trade agreements, and on the strength or weakness of sterling.  This could be a nudge towards greater self-sufficiency, although British farms might also suffer from restrictions on free movement of seasonal labour from EU member states.  And on the issue of the wider economy it is striking that, even with so many unknowns, a poll of the FT’s leading thinkers found almost three-quarters did not think that Brexit would enhance UK growth in 2016.


Beyond agriculture and the rural economy, there is a much bigger picture that must be considered.  Regulation is often cited as an expense that the EU imposes upon member states.  Employee protection, the Working Time Directive, the renewable energy strategy, regulation of the banking industry, are all among the most costly.  Whether a post Brexit UK Government would lightly abandon them is, of course, another question.  The other elephant that seems to be dominating the room is immigration and the refugee crisis, although any closer examination of the issue makes it clear that this has no real bearing on the “in or out” question.  Our global responsibilities to people fleeing war, civil instability, persecution, or indeed poverty, remain the same.


In the long run, most economic analysis would indicate that the UK will survive and even thrive, whether inside or outside Europe.  But how quickly and to what degree this situation might prevail after Brexit would depend on negotiating new trade agreements, implementing new regulations and absorbing the costs of transition.  In the meantime the costs of uncertainty are impossible to calculate, the refugee crisis will continue to challenge us and there might even be a threat of disintegration within the UK and a residue of ill feeling between us and our European neighbours.


Read the full discussion paper by Professor David Harvey and Dr Carmen Hubbard on the Centre for Rural Economy website.
Posted by Unknown at 10:07 No comments: 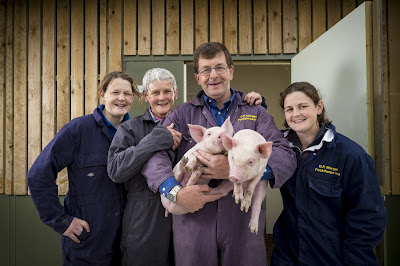 
I love farming and to be honest I don’t know what I’d do if I wasn’t farming but I do feel we are up against it most of the time. We are all tarred with the same brush but are all sorts of farmers any time, because I have nothing to hide.  But something needs to change because we are producing a product from a live animal that must be looked after and paid for fairly. So, to open another can of worms let’s leave the EU and support our country because I’m sure the EU need us more than we need them.
Posted by Unknown at 15:33 No comments: