An inventory of advisory services in Europe

Katrin Prager (James Hutton Institute, Aberdeen) reflects on the prospects for farmer support provided through advisory services and highlights some of the findings from the EU project PROAKIS
At the end of a project I always take for granted the knowledge I acquired. Because I have integrated all new information into my existing knowledge I assume that everyone knows what I know at that stage. This is probably what makes it difficult to sum up what new findings were produced. Nevertheless, I will try to highlight what stands out for me from the PROAKIS project.
Agricultural advisory services exist in all European countries but take different forms, ranging from public to private organisations, often including hybrid arrangements with farmer-based and non-governmental organisations. The eight partner organisations in the PROAKIS project compiled an inventory of not only advisory services, but the broader Agricultural Knowledge and Innovation System (AKIS), within which they are embedded. This had not been done before.
When in the past an AKIS was about transferring knowledge from research to advisors, who then passed it on to farmers, they are today seen as a system where knowledge is exchanged between different people and organisations from the first, second and third sector (see example diagram). 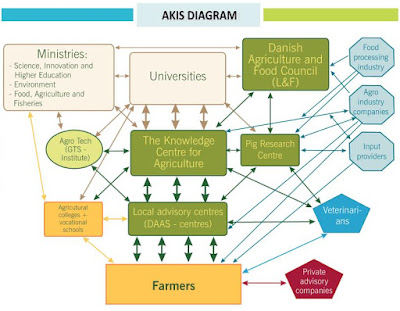 ﻿
Example of AKIS diagram for Denmark


What became obvious through compiling the inventory was the immense diversity, aptly illustrated in the  27 posters featuring an AKIS diagram - we created one for each country that was a Member State in 2013. Forcing this diversity into a classification is inherently difficult. Nevertheless, my observation from looking at the map of main advisory organisations is that the dominant organisation in most of the Eastern European countries is public, while farmer-based organisations play the main role in many Scandinavian and South Western European countries. Only the Netherlands and Estonia are dominated by private advisory services. In countries with a federal or strong regional structure such as Germany, the UK or Italy, a mixture of organisations is dominating the advisory scene. Overall, there is a trend towards commercialisation and the privatisation of advice.

Innovation is becoming increasingly important in the agricultural sector. Recognising that innovation requires knowledge, we found AKIS diagrams a useful tool (email Katrin.Prager@hutton.ac.uk if you would like a copy of the article) to visualise relevant actors and explore the knowledge flows between them. Some issues around knowledge flows were commented on in an earlier blog by Sean Ryan. Agricultural or rural networks are one means of enhancing the sharing and adoption of innovation. In the project, we studied four different networks, some of them initiated from the bottom-up, others top-down. We found that such networks can support innovation, but they need to be embedded into an existing advisory system. This emphasises that they cannot be used to counter (public) disinvestment in advisory infrastructure.

There is another benefit of having a public presence in the AKIS, and in advisory services in particular. Although the market can meet demands for agronomic, book-keeping and ‘form-filling’ advice expressed by farmers, environmental issues and broader rural development are unlikely to be part of this scenario, because of their mainly collective benefits that rarely translate into private (financial) gain. The farmer has no incentive to request and pay for public good advice, therefore this is where publicly-funded advice has an important role to play. In addition, without the state maintaining an overview of the advisory landscape and monitoring what advice is provided by whom, there is no way of knowing whether farmer needs and societal demands are being met.


So what are the prospects for farmer support through advisory services? The outlook is positive in those countries where the importance of advisory services is recognised politically, with strategies and associated schemes backed up with funding. Prospects are also good where diverse formal and informal networks exist between advisors, farmers, researchers, consultants, and other relevant actors. Where these components are missing, the consequences will be felt in the future, or are already becoming apparent. 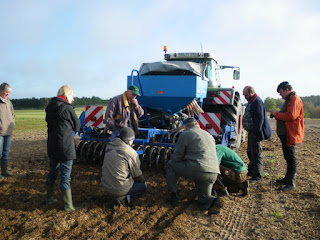